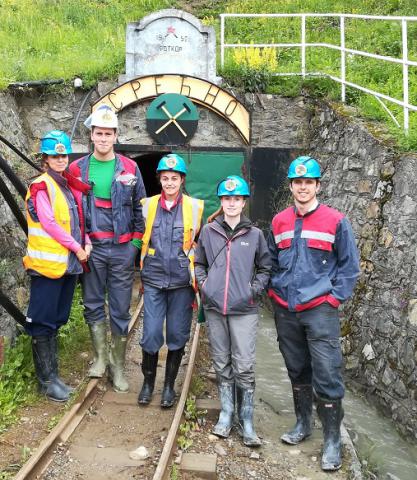 Mineco regularly hosts students from the UK and Serbia at our mining operations, allowing them to make their first hands-on experiences in the industry. This time we have two students from the Camborne School of Mines at our Rudnik Mine in Serbia. Read about their experiences during the first two weeks of their placement here:

We landed in Serbia on the 12th of July to be greeted by surprisingly hot weather and an extremely enthusiastic member of the Mineco Project Delivery Team. The drive from the airport to Rudnik mountain was supplemented by a guided tour of the route and a pit-stop to grab some of the local delicacy, spit-roast pork for our supper. We received a warm welcome from the rest of the Mineco geologists, which meant that by the time we settled into our accommodation for the night we were already well settled.
The first day saw Bane, who greeted us at the airport, take us on a geological tour of the Rudnik license; introducing us to the major rock units, mineralisation and alteration types in the region. Whilst this was extremely helpful, the complexity of the area warrants more than one day’s work and we are looking forwards to further unravelling the geological picture during our time here. The next day we got straight out in the field with one of the soil sampling crews, investigating the targets highlighted by the initial geophysical surveys conducted over the wider license area. Rudnik has a beautiful landscape of forested hills and valleys, however the downside to this is that there is a distinct lack of easily-accessible outcrop. This makes techniques such as soil sampling and core logging crucial to locating new ore bodies in Rudnik.

In our first week, we have also had the chance to get-to-grips with core-logging, another exploration technique that we are experiencing really for the first time. It was fascinating to be able to see the different types of mineralisation commonly found at Rudnik; from small flecks of pyrrhotite right through to sections of massive sulphides that get all the geologists swarming round the core tables. It was really interesting to see how, through the seemingly simple process of core logging, we slowly began to understand and recognise some of the patterns of mineralisation that were explained to us on the first day. 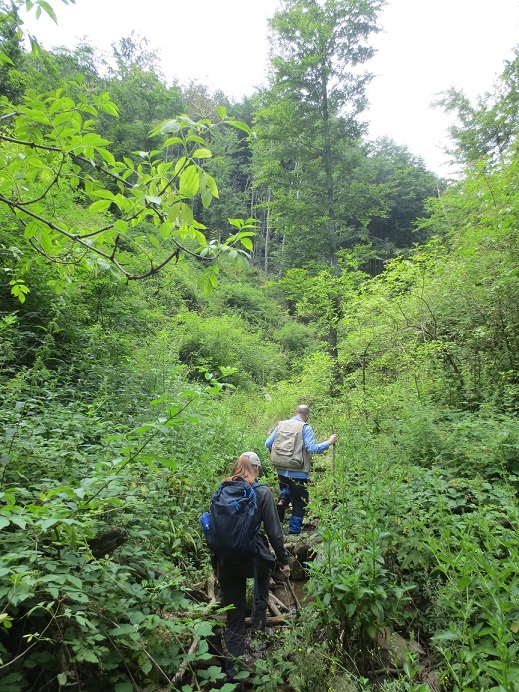 To round off our first week on a high, we had our first trip underground to the exploration hallways of Bezdan mine. Having been surrounded by the quality rock specimens in the Geologists’ house all week, we couldn’t wait to get underground and collect our own. Sure enough, we both emerged from the mine overburdened with specimens, only to be told by Bane that these would pale in comparison to the specimens from other sections from which they actively extract and process the ore. In-between specimen-hunting it was also good to get a short introduction to face mapping and to see the miners prepping the explosives for the subsequent blast. Our first time underground in Serbia was not dampened by the hole in Torin’s wellies and has left us optimistic for the weeks to come!

During our second week we have got fully stuck-in to the soil sampling, as well as seeing the most recent set of geochemical results come back for the soil which were interesting to interpret. We also did our first day of surface mapping, a very different experience on the forested slopes of Serbia to the windswept cliffs of Cornwall that we are used to. After our safety induction got postponed, we went to visit one of the drill-rigs. It was quite interesting to see how the cores are drilled having spent a number of days logging them. Finally, to finish our second week we went underground in the main section of Rudnik mine. To name just some of the highlight; getting to see some faces which are in the process of extraction and taking samples of the ore, seeing the different lithologies in “perfect” exposure.

We are thoroughly enjoying our time here so far and cannot wait to see what the next two weeks will bring.