MSc Dissertation Placement - Week 1 - Getting to grips with the geology. 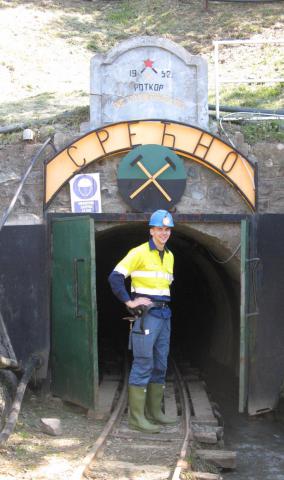 My name is Richard Roethe, I am a German student of the Camborne School of Mines in the UK. As part of my MSc-degree in Mining Geology, I have to produce a dissertation that is associated with geological issues which are commonly encountered in the mining industry. Regarding the economical state of the industry at the moment, I count myself very lucky to have been given a ‘hands-on’ opportunity with Mineco in Serbia. The aim of my dissertation is to investigate the geology of steeply dipping vein mineralisations. For this I will investigate a part of the mine using structural geologic, geochemical, petrological and statistical methods.

The diversity of the geology and mineralisation styles that are found at the Rudnik mine provide an excellent environment for a dissertation. As the geological evolution of the Rudnik Mountain complex was largely influenced by geological events of volcanic, magmatic, hydrothermal and geodynamic nature, an integrated concept of these processes is crucial to understand the ore forming mechanisms.

Upon my arrival in Rudnik I was welcomed by the ‘Project Delivery Team’, who were very friendly and accommodated me in the facilities at Rudnik. In the first days at the site I received an introduction into the regional geology and the different geological units that are significant for the mining at the site. There is no substitute for fieldwork in geology, so I was taken on a walkover tour on the surface and underground in the first days. I was lucky to have advice at hand from Mineco’s very experienced geologists, as some lithologies appear deceivingly similar, yet strongly differ in their geological genesis.

In my first days I was also able to help with the geological tasks that are carried out on a daily basis in an exploration drive. This included lithological and structural mapping of a vein mineralisation, and surveying of the advancement and dimensions of the drive. This exploration drive is being developed as the underlying geological setting at Rudnik demands a tailored approach to geological exploration. Much more geological information can be gathered in an underground environment, where the rock face is clearly visible over a large area.

In summary, the food is outstanding, the people are very friendly and despite growing up In Germany, I can safely say that beer from Serbia is one of the best!

Established in 2003, Mineco now employs some 2,000 people in 8 European countries. Through our London, Moscow and Zug offices we procure, market and move non-ferrous & precious metals  (including all of our own concentrates and metals). Mineco Ltd operates 4 base metal mines in South East Europe; Gross in Bosnia and Rudnik, Veliki Majdan and Bosilegrad in Serbia. Furthermore Mineco’s in-house Project Delivery Team are working on several development projects in the Region.

In 2011 Mineco acquired the Fregat secondary lead smelter located near Moscow in Russia.