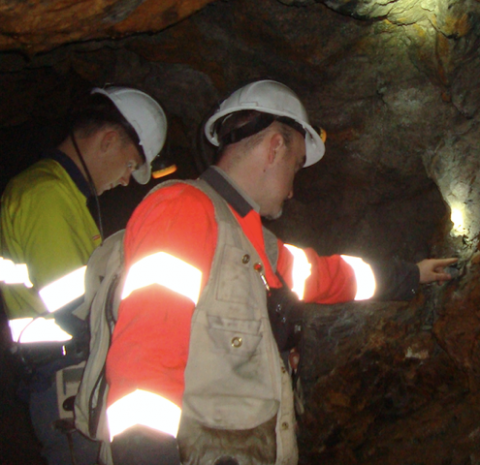 The fourth week was mainly about structural mapping in different areas of the project, the identification of structural features, the measurement of their orientation and analysis of the association with mineralisation. The survey of the structural aspects of the mineralisation is especially important when dealing with hydrothermal vein deposits. This is because hydrothermal vein mineralisation forms when fluids migrate upwards along conduits which are mostly controlled by tectonics and lithology. These fluids carry metallic ions, the origin of which is often associated with magmatism or metamorphism at deeper crustal levels. At a certain point, the physical and chemical conditions of the fluids change and the fluids become super-saturated of the metal. This results in the precipitation of the metal as a mineral, for example a sulphide like galena, sphalerite or chalcopyrite. The structural features not only control the spatial distribution of ore minerals but also influence the physical and chemical conditions which trigger the precipitation of them.

The high variability associated with narrow vein mining is commonly a deterring factor in the economic assessment as it makes a meaningful estimation difficult. However, the variability is usually strongly related to structural features and changes in lithology. If these geological aspects of the deposit are understood, an estimation of a mineral resource can be undertaken with higher confidence.

As vein mineralisation is often hosted in structures that are associated with tension, shear or extensional faulting, an integration of the broader geotectonic setting may also be significant for the exploration of un-discovered mineral resources.

Whilst all of this sounds very conclusive, a clear interpretation of results is not always straightforward, especially when the hosting lithology has a longer structural history, in which primary structures might have been ‘overprinted’ by further tectonic processes or alteration.

I really enjoyed this work and I have learned a lot in the discussion with the PDT geologists about the structural features that are observed at Rudnik.