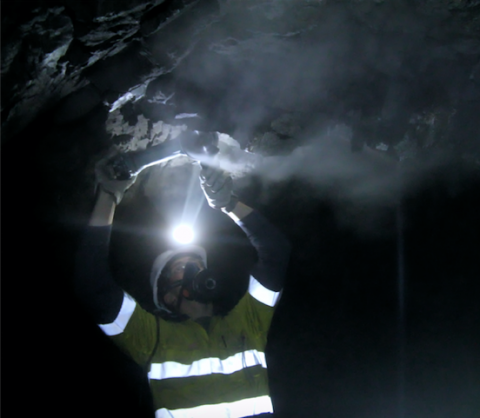 With the preparations of the last weeks completed and everything in place for my sampling campaign, I set out to take channel samples over almost 200m of strike length across the vein mineralisation. This was to test the grade and thickness continuity of the mineralisation and to correlate it with the structural measurements that I collected last week.

Due to the available exposure in the underground development at Srednji Šturac, I was able to take channel samples, which is a sampling method favoured for a better confidence in the assessment of variable vein mineralisation. The samples were taken in the drive backs, where the vein outcrops along the tunnel. An evenly sized channel is cut into the rock using a diamond saw, then chiselled out and collected. In our sampling effort we used a battery powered grinder with a diamond blade and several back up batteries, which proved very effective. This technique is quite common, however it can be time consuming and is often not applied when time for sampling and mapping is limited by short intervals between blasting, scaling, loading and drilling operations during the advancement of the drive.

Crucially the success of the sampling strongly relied on the help from the PDT-geologists and the miners who ensured the safety of the sampling process. Despite the use of the battery powered tool, the sampling was a very exhausting activity and I am very grateful for the support I got from the team.

However, as with all geological data collection, it is important to critically assess the possible sources of error in order to draw a meaningful conclusion of the results. Factors of possible error in this channel - sampling effort include the variable profile of the vein exposure in the drive and variable rock hardness across the channel, which are factors that introduce a sampling bias into the result.

This week at Rudnik was a very valuable experience in underground geological sampling and the practical issues that are associated with it. As with every undertaking in an underground mine, safety comes first, and if a sample cannot be recovered in a safe way, it is not taken. Luckily, the mining team was very supportive and prepared the sampling sites for us.

Next week I am visiting the on-site geochemical laboratory and the mineral processing facility, which I am very much looking forward to.