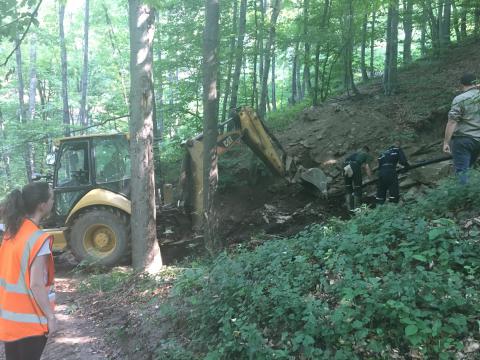 Moving into our second week in Rudnik, we set out into the field with the main focus to locate old pinga and adit workings, excavated during Roman, medieval and more recent times. As we recorded geological observations and structural measurements of these features in our notebooks, it became clear to us that the Roman and medieval miners were extremely smart, as nearly every single one of these features had some form of economic ore evident. It’s fascinating to think that the Serbian mint was located at Rudnik during the 1300s; and with the sheer abundance of malachite, azurite and chalcopyrite (copper ore) in these ancient workings, I can see why!

In the days that followed, we took part in the excavation of two old mine workings that we had previously mapped and from which we conducted trench sampling by the Tomovič river. With the help of a CAT digger, the excavation was carried out, and the mineralisation was a sight to behold. Oxidised metasediments with calcite stockwork accompanied by massive chalcopyrite and galena was a great discovery, and hopefully a platform for further exploitation of old workings in that area.

Later in the week, we resumed logging cores that had been taken underground. Having done this a couple of times last week, our observations of the rock types and mineralised zones were becoming accurate and concise, which not only helped our geologically descriptive writing skills, but also the company.

Even after an exhausting week, my colleagues and I still found the energy to have a kick around with the miners on the nearby field, as well as catching some of the Euros football down in Rudnik village on the TV, with many of the locals recognising my English look, and reminding me that my country had been beaten by Iceland… Thanks guys!