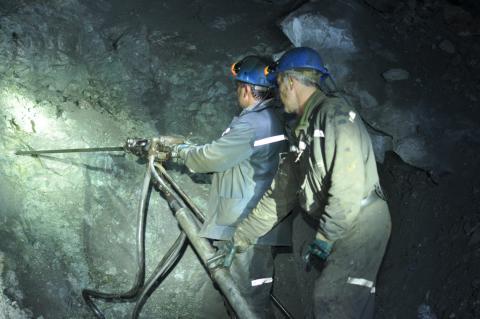 So, we started week three continuing with the work we were doing last week; orientating the drill cores so they could be logged. Orientating of the drill cores is important because, in order to take accurate structural measurements of veins and foliations etc. we need to know the position of that core in the ground from where it was taken. The bottom of each (usually 3 metres) run of core is marked with a red dot by the drillers, which allows us to draw straight lines on the bottom of the core with arrows pointing into the ground. Certain pieces of the core with interesting structural features can then be put onto ‘the rocket launcher’; a piece of equipment made by the team, which replicates the angle and azimuth of the drill core, which then means strike, dip and dip directions can be measured. Some veins may contain sulfides which makes them economically interesting whilst others may just be calcite/quartz veins that cross cut them. We can see different generations of veins and when compared with other drill cores, these sulfide veins often have the same dip and dip direction. These can also be related to bigger structures like larger/regional scale faults and fractures in the area.

Once this was finished, parts of the core with geologically and structurally interesting were sent to be cut in half and sampled. Half of the drill core would be put into sample bags and the other half remains as a ‘reference’.  They will receive results back from the lab in a few weeks.

Later on in the week we had the opportunity to go underground and have a look at the production line, which we were both really excited about. We were taken to see a number of different ore bodies by one of the production geologists. He showed us areas where large ‘ADITs’ had been mined out and showed us where he thought there may be more potential to expand these areas and follow the mineralization. We could see the clear contacts between various rock types and a number of large faults and veins and how these structures were related to mineralization.

Having never been underground in a working mine before, I can easily say this was one of my favorite experiences of the trip so far and here’s hoping we get another chance in Gorazde!

Almost at the end of our trip here in Rudnik and will be on our way to the next project, Gorazde, in a couple of days. Seen some fantastic geology here and looking forward to learning more in Bosnia.

Established in 2003, Mineco now employs some 2,000 people in 8 European countries. Through our London, Moscow and Zug offices we procure, market and move non-ferrous & precious metals  (including all of our own concentrates and metals). Mineco Ltd operates 4 base metal mines in South East Europe; Gross in Bosnia and Rudnik, Veliki Majdan and Bosilegrad in Serbia. Furthermore Mineco’s in-house Project Delivery Team are working on several development projects in the Region.