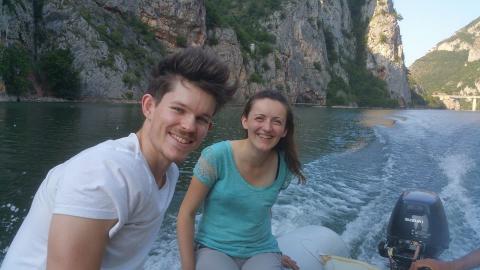 Having said farewell to our fellow colleagues and friends in Rudnik, it was time to travel onwards to Gorazde, Bosnia. A grassroots project in the rural countryside alongside the magnificent Drina River.  This excited me as the project was in the early stages of exploration, which meant it was back to basics. Large amounts of information therefore remained uncertain, opening opportunity for large progress to be made over the coming weeks!

Our first day was spent being brought up to speed with the project. The project geologists showed us several underground workings and outcrops that were interesting within the license area. We were also shown current and planned drilling sites, with explanations of proposed position, azimuth and dip of each. Some of the new drillhole sites were inaccessible and new transport connections were needed. We mapped the area, logging waypoints in order to create a rational positon for the proposed road, whist measuring veins and noting the geology of outcrops we passed. A proposed pathway through the mountainous vegetation was reached by the end of the day. One which ran close to our proposed drill site, lead to minimal environmental damage, while being as direct as possible in order to minimise working hours. We had also between the four of us decided to propose a slightly different position, azimuth and dip to one of the proposed drilling sites based upon a discovery of an antimony vein within a historic adit. The new location would plan to intercept this vein as well as the veins it had originally planned too. The new site was also better positioned on open flat ground that would prove more environmentally friendly, which lay in the company’s best interests.

The remaining part of the week was spent core logging. It was really interesting to see a completely different set of geology to Rudnik. Mineralogical indicators were also different and therefore much of the drilling was concentrated around chasing a contact between the schist (hanging wall) and the limestone (footwall), in the hope of hitting mineralisation which was often present in a principle vein.

On Sunday evening we were lucky enough to get given an opportunity to take a speed boat down the Drina River. It was a fantastic experience in which we had an opportunity to view some of the regional structures within the massive limestone and schist cliffs. It really was breath-taking, displaying the beauty of Bosnia.