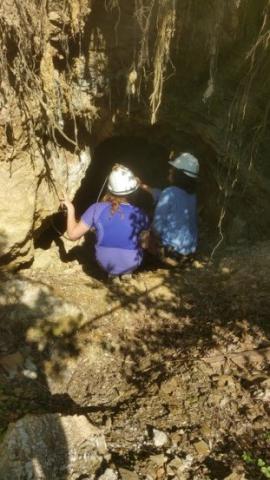 Nearing the end of our truly amazing experience here in Bosnia, we couldn’t help but wonder where the time had gone. Six weeks has really flown by! However with a week still remaining there was more than enough time to learn so much more.

With that in mind, it was off to the field where we would begin our final week with some back to basics. We set about mapping along the newly made road in Kordici. Plenty of fresh outcrops made the job simple and there would be no climbing treacherous slopes this time. That was until of course the inner-adventurer comes alive and sliding down rock faces to get to that slightly better outcrop was a necessity. Legs successfully cut, white tops ruined but with beautiful maps to hand, the week wound on. Helping with selection for the final sampling of the four boreholes drilled over the past three weeks, making progress in our own individual university reports and finishing maps, drawings and notes carried out earlier in the week.

Come the weekend, we got given the opportunity to carry out not one but two new exploration techniques. On the Saturday we chose two sample areas to carry out stream sediment sampling. Spending the following few hours creating a topographic map, which was edited in ArcGIS to produce a watershed of both the point files, within their individual catchment basins. Map printed, sampling kit packed we headed out to the chosen locations. The first was surrounded by lovely outcrops, in an easy to get to location, while the second involved a small trek to the stream positioned in an awfully awkward area. Vegetation limited space and the mosquitos were, at best, unpleasant. The procedure involved sieving sediments deposited on the banks of the stream, in order to separate the fine grained sediments from the larger fragments of rock. The larger grained sediments were used to gain information regarding the geology of the catchment, while the finer grained sediments would be bagged up and sent to be sampled in a laboratory.

The following day we got the chance to do our first geological mapping underground. We were both very excited since we had visited the underground on several occasions but never to actually carry out any new exploration work. The adit we mapped was full of great mineralisation. We could see a wonderfully clear contact as well as several mineralised veins in each section of the footwall, contained within the typical silicified and brecciated limestone. It was so easy to see exactly what was going on, and was a great way to spend some of our final time admiring the geology we had gotten to know and understand.

Its saddening to think this is the end, we have both had a better experience than we had ever imagined. I’m glad to study such a fascinating subject and to have been given this fantastic experience. We have made some great friendships, had many laughs and created lasting memories all while learning more than you ever could sat behind a desk.

Thank you Mineco it’s been a pleasure!